There was a lot of potential in this episode, with two longer storylines–one the continuation of the angels/devil storyline we’ve been dealing with for a while. But unfortunately, outside of a few very cool/trippy visuals it was a surprisingly quiet volume. A lot of human trouble, not enough supernatural craziness. Less moping at least, but without a real transition (at least in my opinion). Not terrible, but certainly one of the weaker entries in the series.

That… was a very story. Which is saying something for Constantine. Papa Midnite, visions within visions, and The President, shot in the head, holding his brains in. Oh Hellblazer. 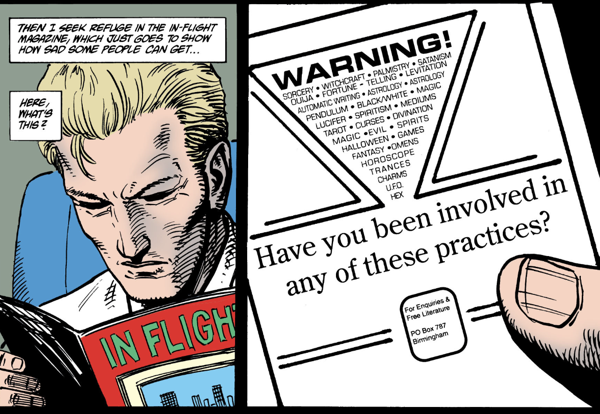 Something I hadn’t really realized: he’s smoking again. Unless this is earlier. I’d think a near death scare like only Constantine can get out of would be enough to quit… 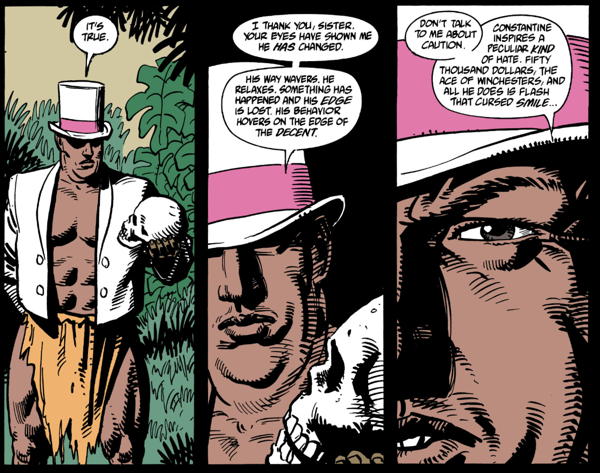 Haven’t seen Papa Midnite in a while… 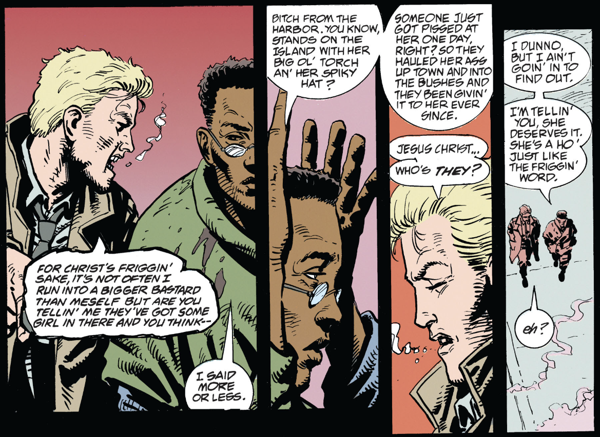 Not in Kansas any more. 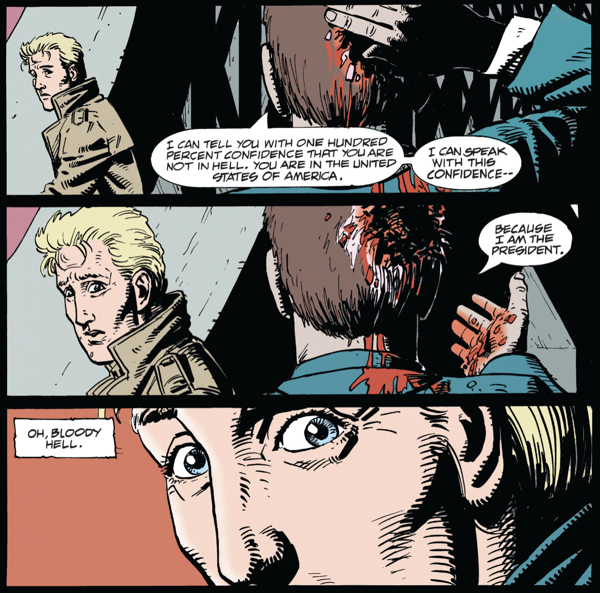 A nightmare in his mind and not much better for his body. What has he gotten himself into this time…

Ah. It all begins to come together.

Hail to the Chief 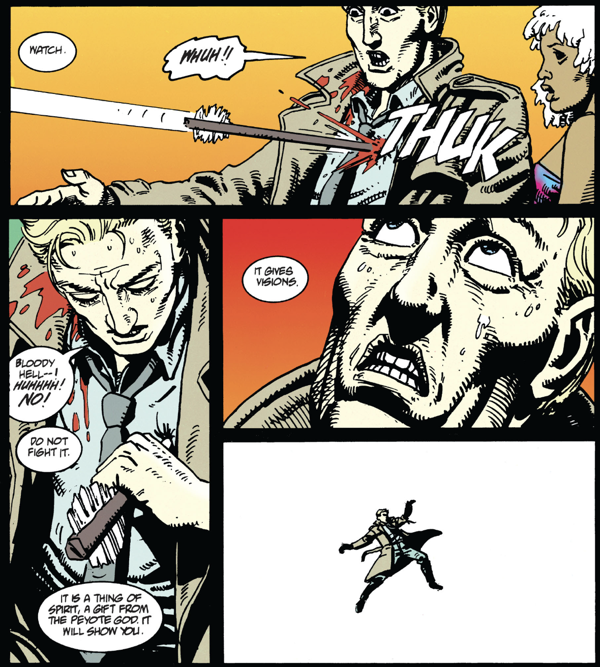 Visions from within a witchwalking? It’s gone recursive!

And then it ended. I guess? Weird. 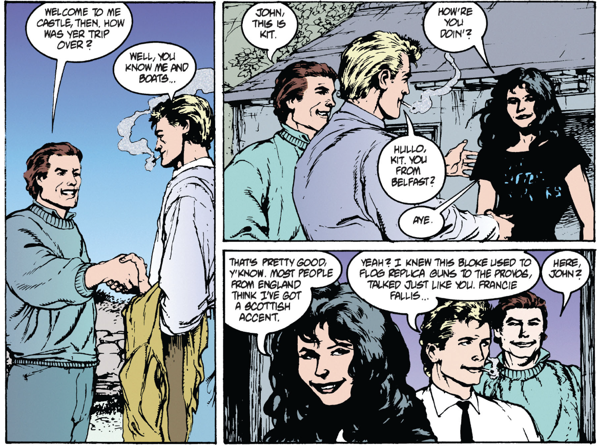 Kit in the Before Times as well. A bit bittersweet now… both for Kit and Brenden. Weird time for this story.

Confessions of an Irish Rebel

Ah. Now the flashback makes more sense. And Midnite even figures into it! Ish.

And the Crowd Goes Wild

Just think of it… 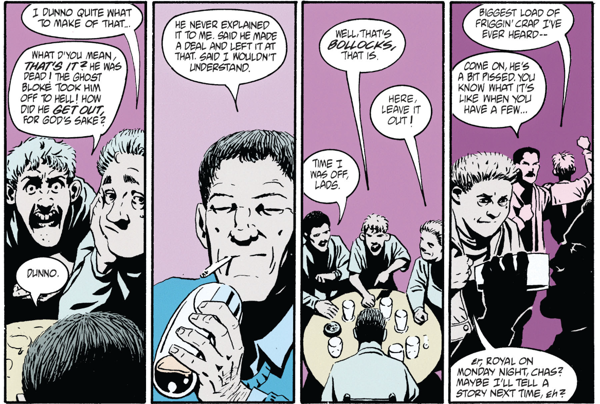 … all the crazy crap Constantine has pulled, from Chas’ perspective.

Rake at the Gate of Hell 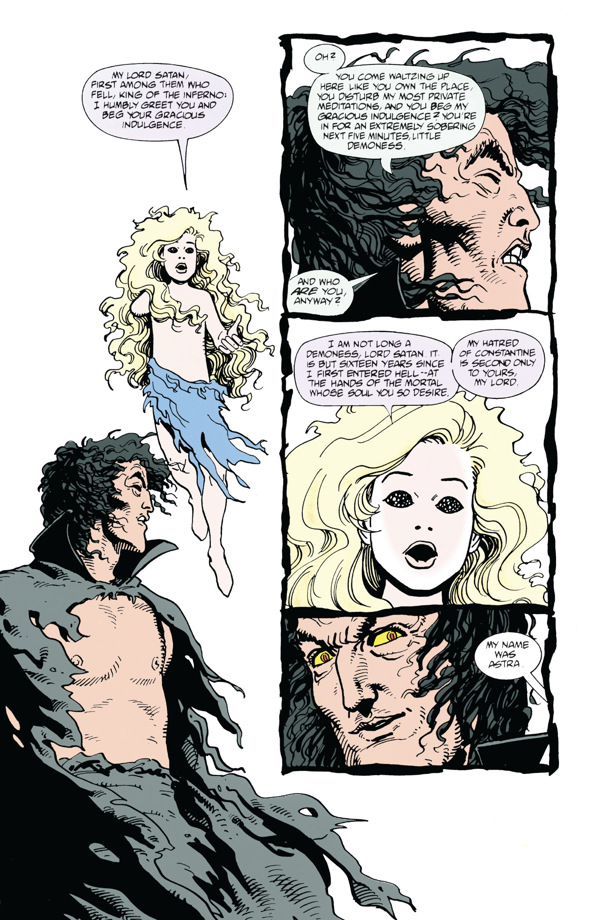 Now that is something happening!

Another old flame too: Ellen this time. 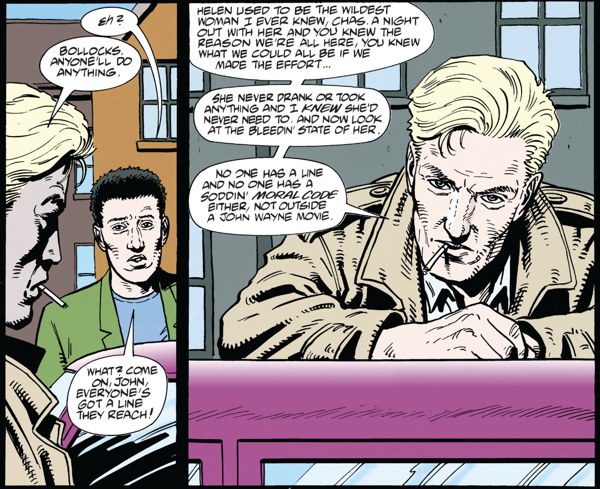 An interesting thought. I would think that everyone does have a line for everything. But… sometimes it’s not practical to get to?

Anyways, we immediately get to this: 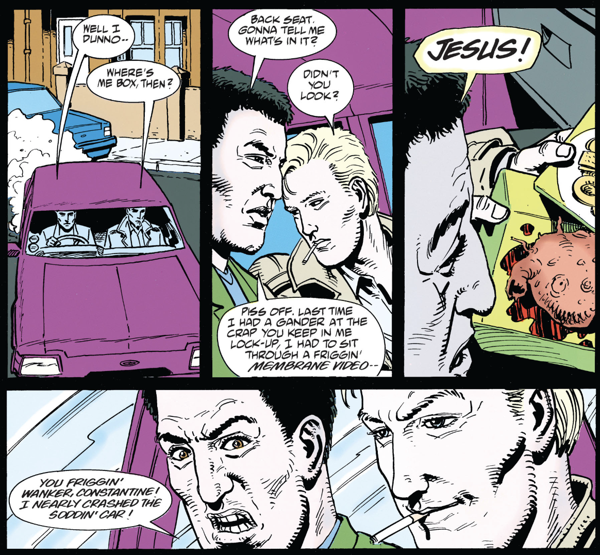 Things that crack me up, Constantine style.

I’m mostly not interested in this spelling unfortunately, except the Hell politics. That, I find fascinating. 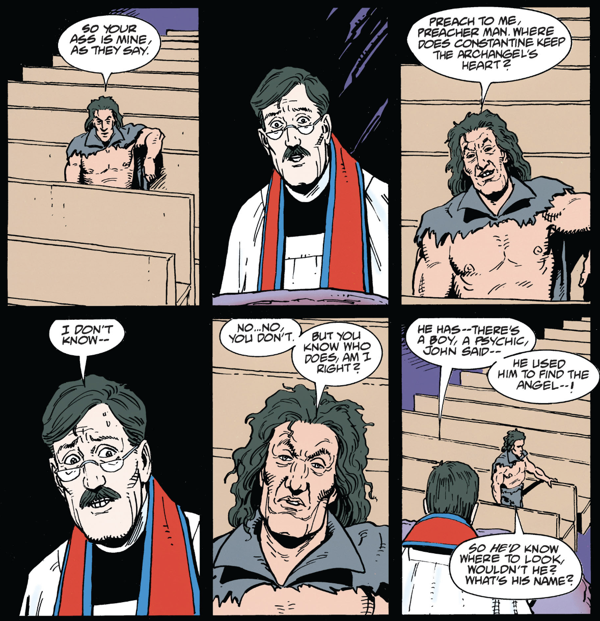 Perhaps they had to spell it out for me in black and white… but it all makes sense now, glow everything fits together. 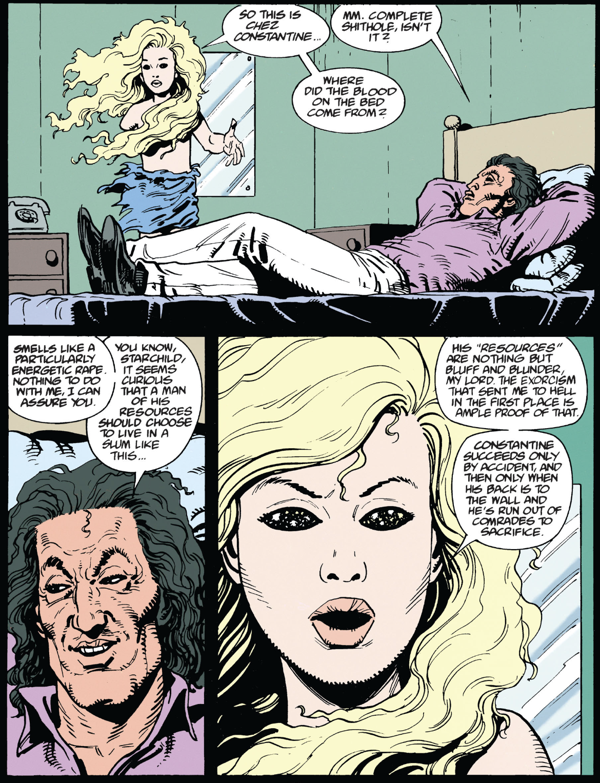 Creepy much? Astra is … certainly an interesting side effect of Constantine’s rather extravagant life. 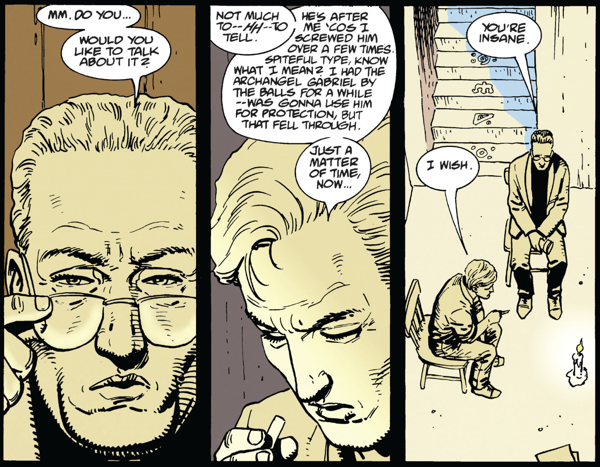 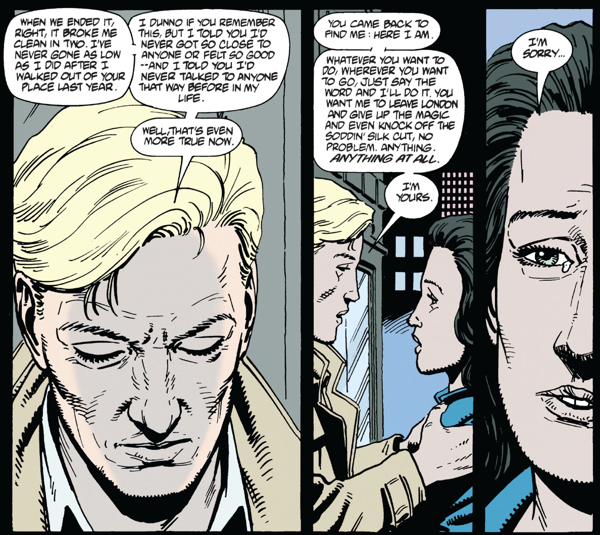 It does cement the timeline at least, but I still feel like I’m missing something. 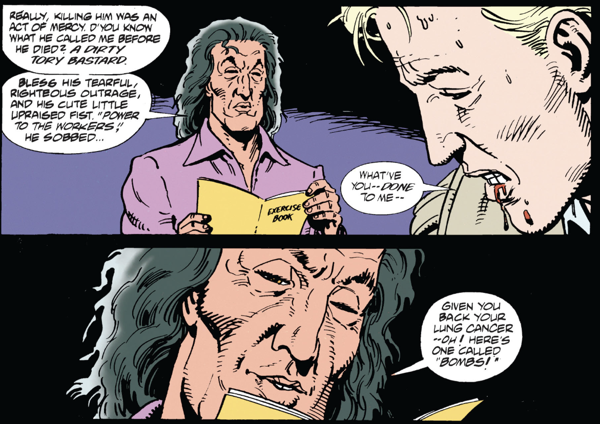 And then, after six parts, they finally meet!

And we finally get the secret that drove that Priest mad: 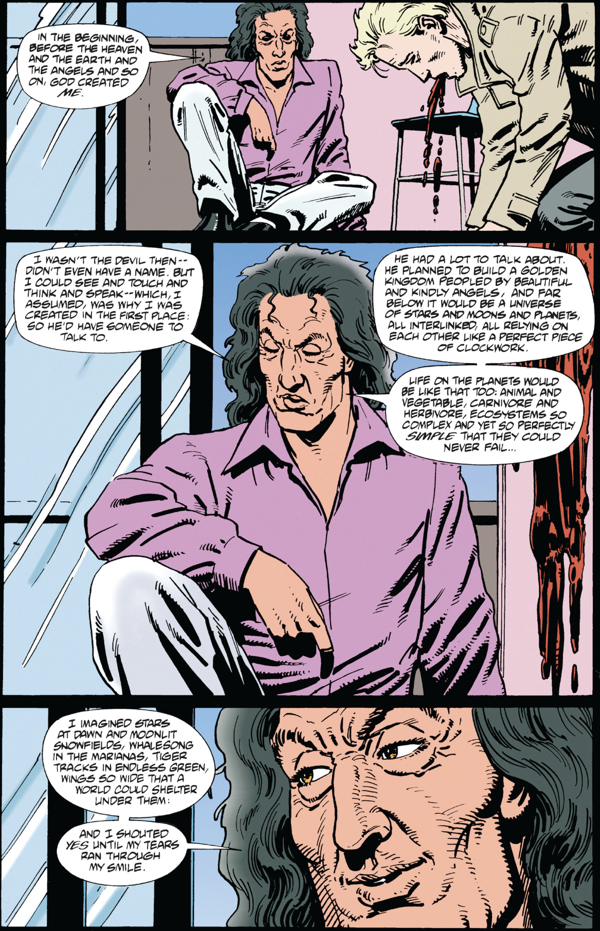 Some interesting thoughts their. God, capable of loneliness. The first creation.

And then… the twist. The twist that makes it all worth it. And Death. Sudden. Forever? 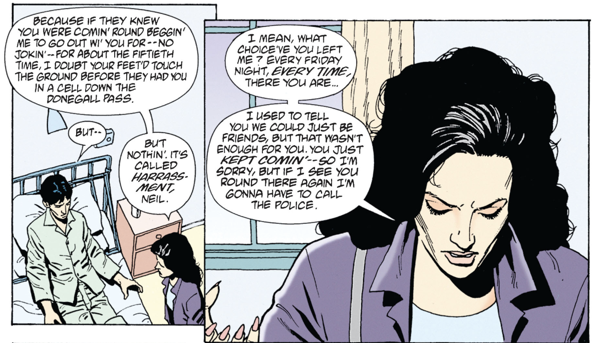 I fully expect this to go well and everyone to live happily ever after… even after he got mistaken for a drug dealer and his kneecap(s) shot off.

Overall… too human and not enough Constantine for me though.