A very solid issue. A couple of great longer storylines with long term consequences (Guys & Dolls was great) and a few shorter one offs (Lord of the Dance in particular I enjoyed). Could have been longer, but there’s still potentially more story to be told there.

I’m enjoying seeing Constantine and Kit’s relationship evolve. It gives a nice human element to contrast the horror. I only hope that doesn’t go too badly for her in the long run…

The Pub Where I Was Born 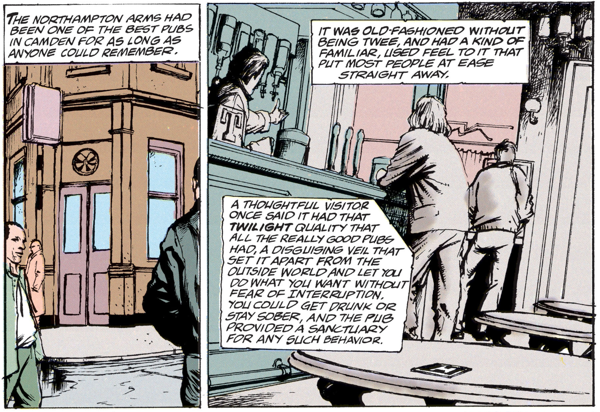 I love the feel of the place. A lot of potential. And a bit of a breather after Deadly Habits: 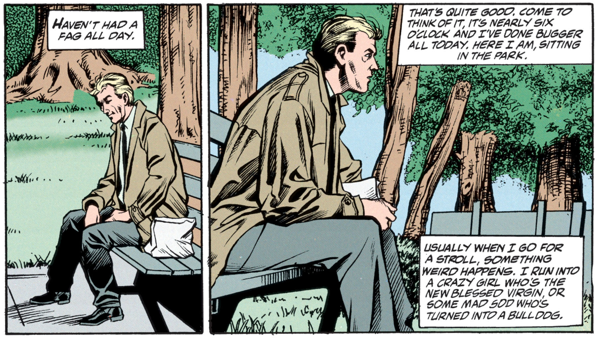 Alas, it wasn’t to last. Not like that’s surprising. It wouldn’t be much of a story otherwise. 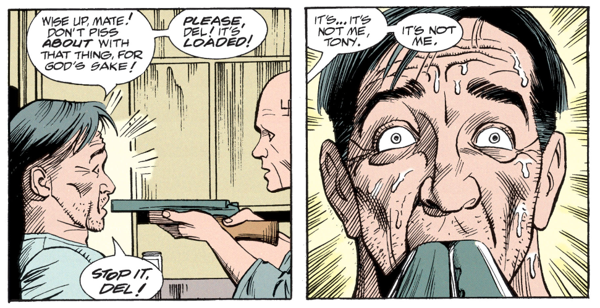 Should have been expected though.

Lord of the Dance 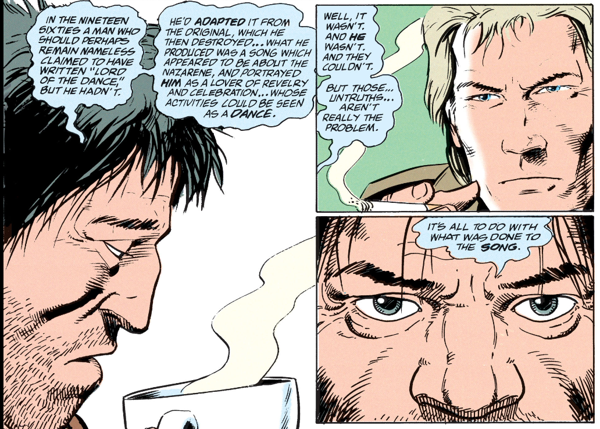 (The version I know best.) 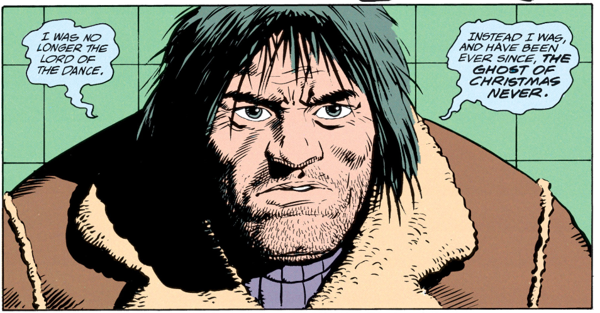 Certainly a standalone, but I enjoyed it. 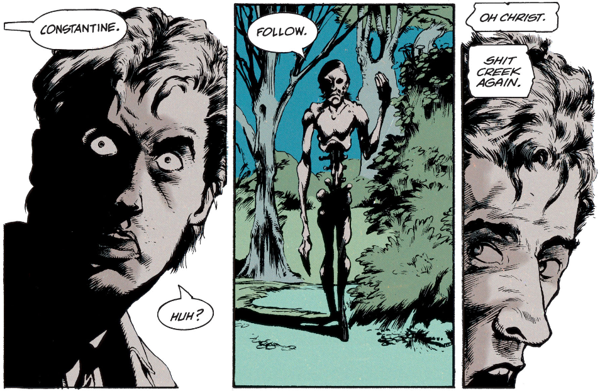 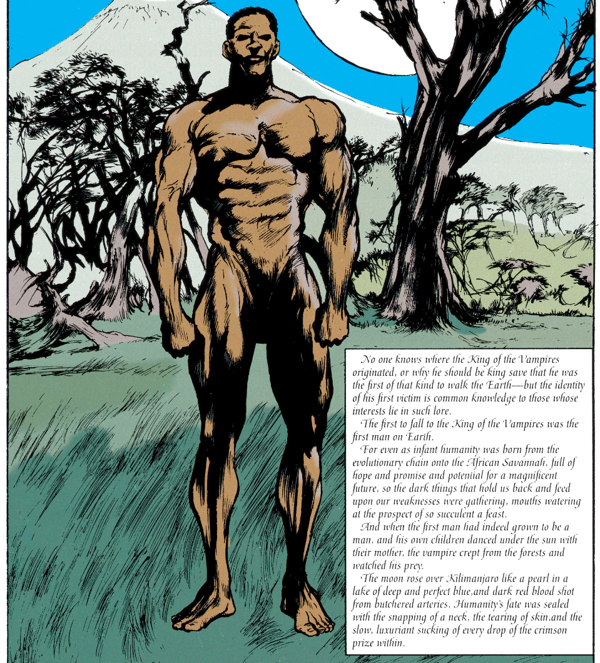 One of those ‘I’ll be there no matter what stories, this time with old ladies. Haven’t seen that particular group in this story. A little creepier somehow. 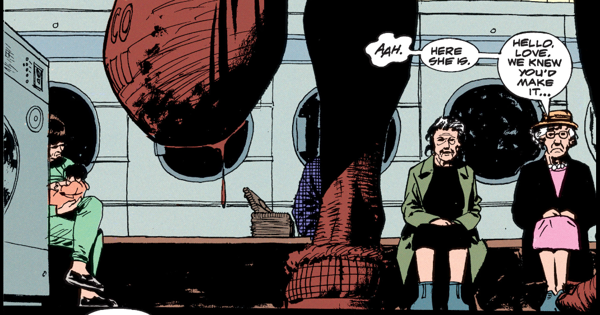 Because you know it’s going to go all twisty or we wouldn’t be reading it. 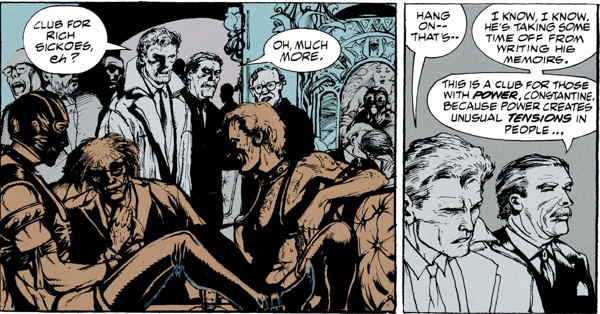 And when even that goes wrong, who’re you going to call? Ghostbusters. Nah. Not nearly snarky enough. 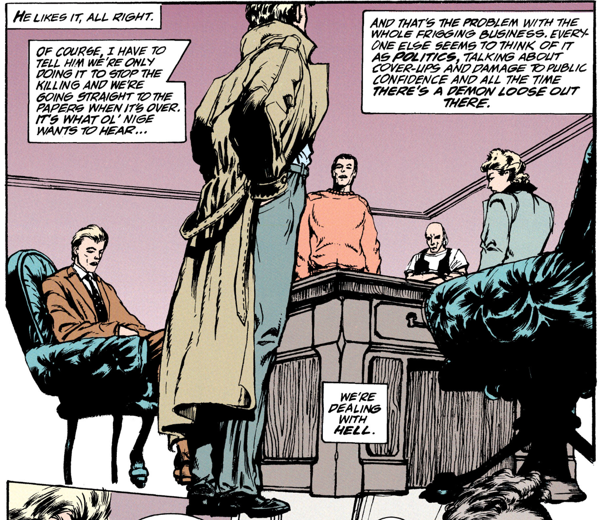 Ramps up to a wonderfully gross seance and a name: 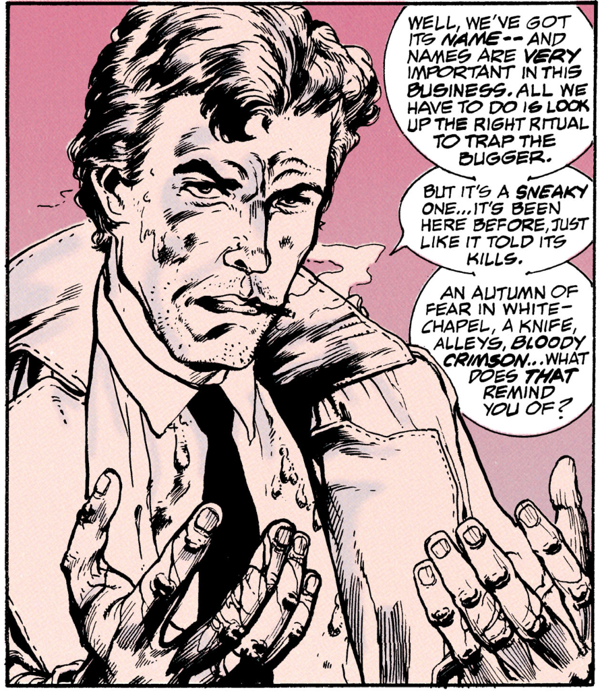 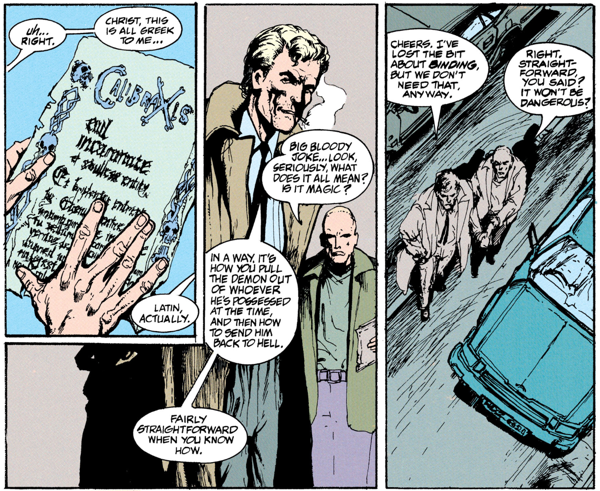 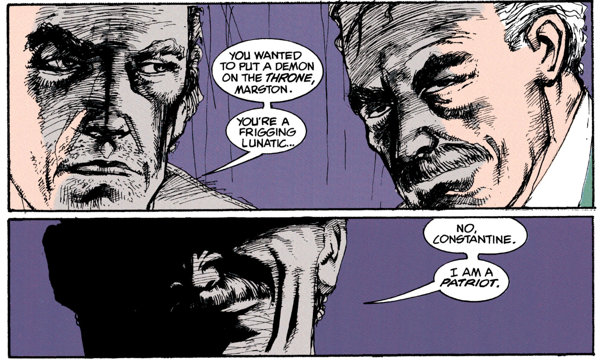 … ah. So that’s the plan. I suppose it makes a twisted sort of sense.

And so it is. A good storyline.

This is the Diary of Danny Drake

Well that’s a bit of a tonal jump after a four issue story line. 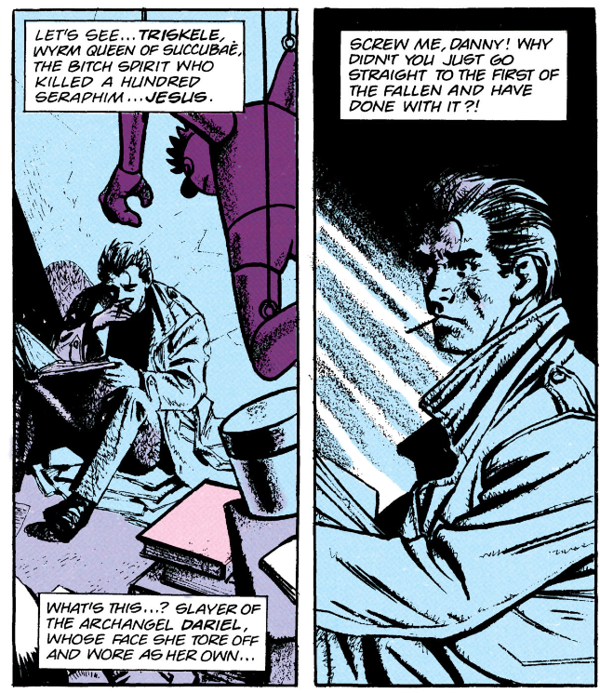 Still interesting though. Can’t think of another story I’ve read with a captured Archangel, even hinted at.

Not hugely much of a story otherwise.

Chas’ uncle? Oy. They certainly do seem to fall into a lot of stories. Comes from being protagonists I suppose. 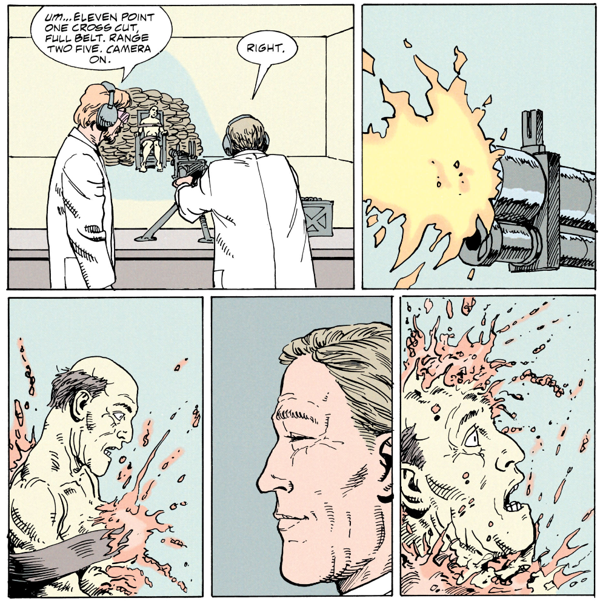 A lot of potential in mixing science and dark magic. I hope that’s where this story is going. Need to find more of that. 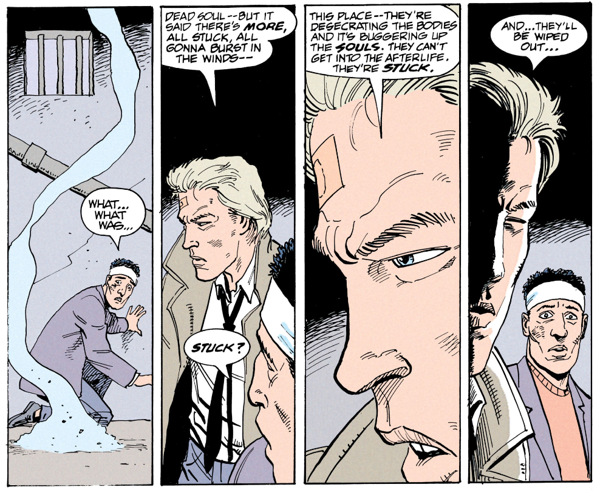 There it is. Now all that’s left is how much is intentional… and how do they stop it.

Oh I do love this storyline. I hope to see more of it (and given the last issue of this volume, we might just).

Fascinating. Following up from Sandman #4: Season of Mists. Perhaps there is something to be said for shared universes. 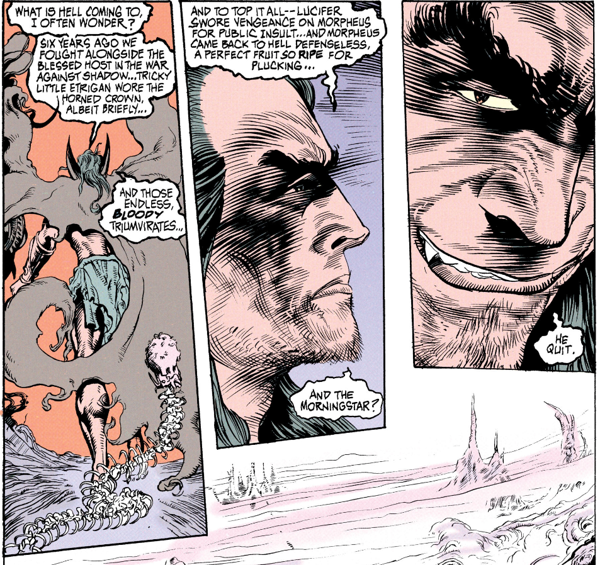 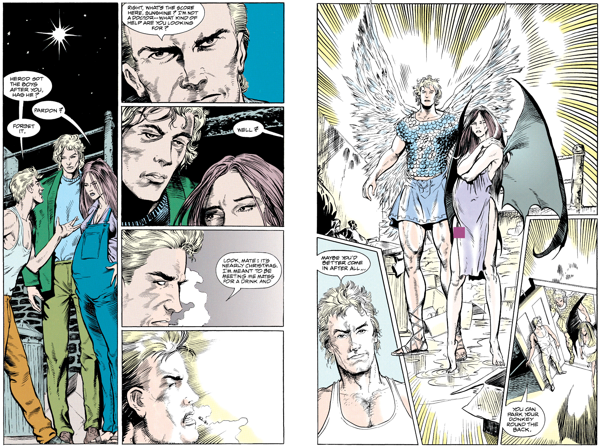 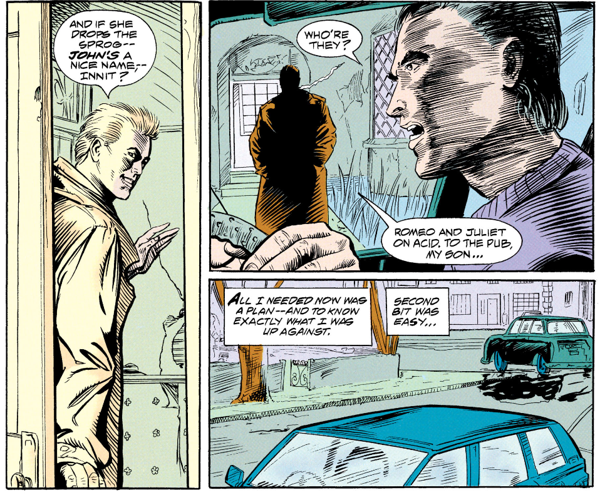 She’s Buying a Stairway to Heaven 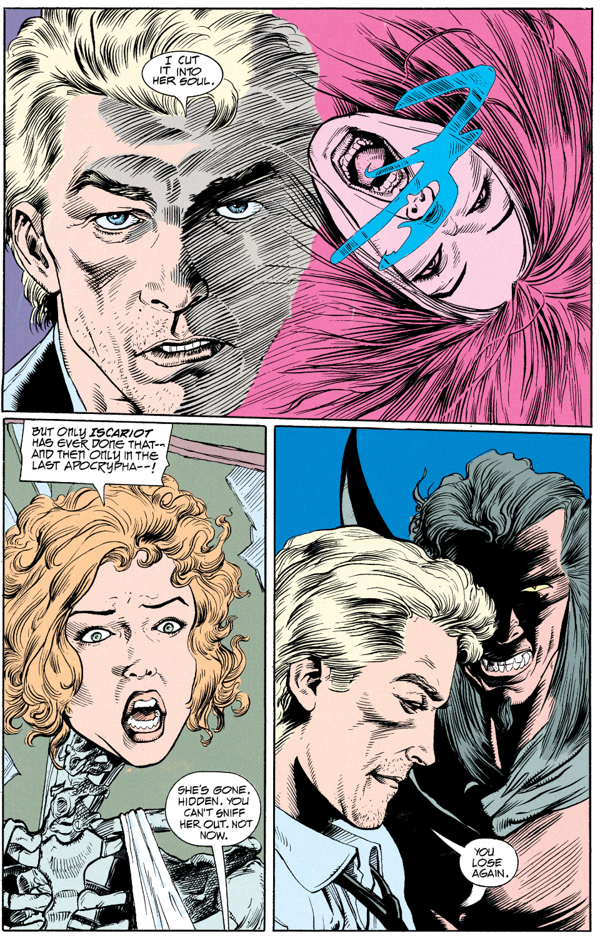 Really, it’s setting up some future payoff, but oh what the story…