I’m of an age where I didn’t catch the original trilogy in theaters, instead watching it over and over again on VHS. When the prequels came out, I absolutely went to see them over and over in theaters (they’re not great, but they’re not as bad as they’ve been made out to be). Now more recently the new trilogy–well, I suppose I should finish those.

But what really interested me about the whole Star Wars thing was the extended universe. What kind of stories can you tell when you get beyond the Hero’s Journey Good versus Evil tropes and really get a chance to dig into the wider universe. There is just so much potential there.

So where do we start?

It’s a relatively short story about Darth Vader, set in the close aftermath of A New Hope and the destruction of the (first) Death Star. Which is … quite an interesting story to tell, making the protagonist a definite Bad Guy. 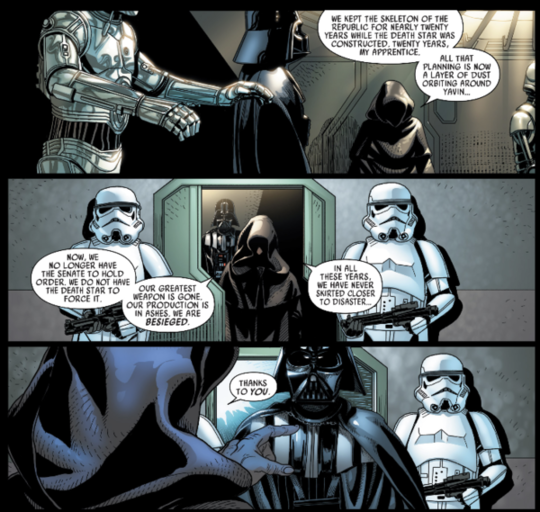 It’s fascinating to see more of the relationship between Palpatine and Vader than we get in the movies. Palpatine is capital-E Evil, Vader is terrifying, and yet here we get stories about Vader on Palpatine’s bad side. The Empire is in power, but it’s a fragile power, something we don’t actually see that much in the movies.

Other than that, perhaps my favorite part of the series is the addition of a few lovely fascinating new characters. Especially Triple-Zero:

Take C-3PO and make him insane and homicidal. Delightful. 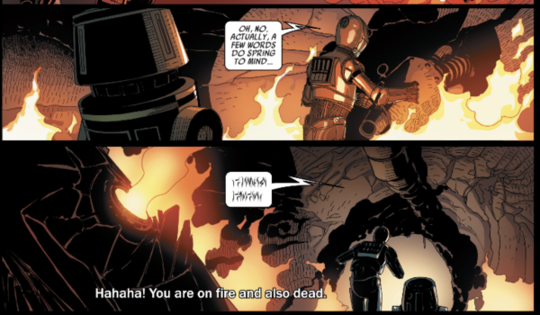 On top of that, Dr. Aphra. She’s basically a fixer for Vader and the relationship is kind of neat: 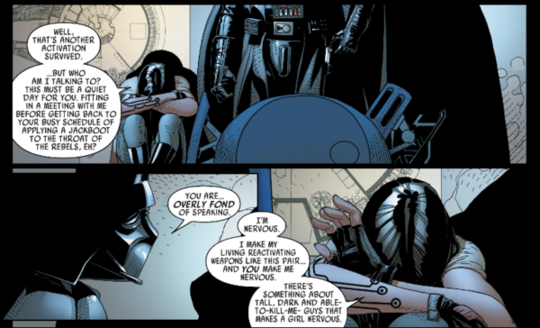 Ever since Amidala, Vader has been… let’s go with a bit troubled. So to actually give him someone that he might just care about (even if it’s only for the job, it’s never quite clear, probably even to Vader), is fascinating.

Especially, since she knows what’s up: