White Sand has something of an odd story. It’s the first novel Sanderson finished (and also the 7th, a complete rewrite), but in prose form was never published. You can get it if you ask him (I think signing up for the newsletter? It’s been a few years) and I read it back in 2016.

Now though, the same story has been actually published as a three volume set of graphic novels. Having gotten rather more into graphic novels over the last year, of course I had to give it a try, so here we go!

On the plus side, I greatly enjoyed the artstyle. It feels like a brilliantly lit desert world, awash with tans and earth tones. The contrast with the darksiders (Khriss especially) is fascinting and it’s a joy to watch. I don’t really have a mental picture when I read works, so having one provided doesn’t jar against that as it does to some others, so I enjoyed seeing it. 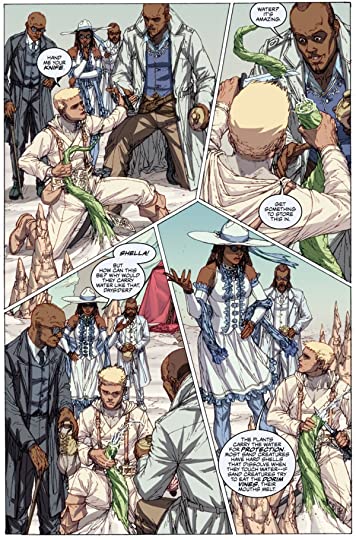 Another shot later in the novel, when we see one of the cities in what is essentially an oasis: 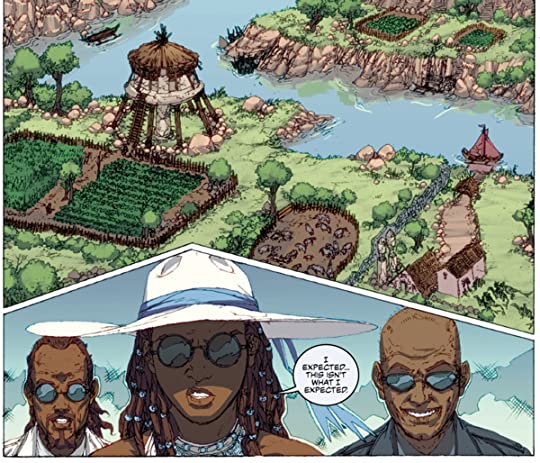 I think my favorite part of the visualizations overall is actually Khriss. She’s got a wonderfully distinct style, in the strong white and blues. Given her wider Cosmere implications, it’s fascinating to having something to see for her: 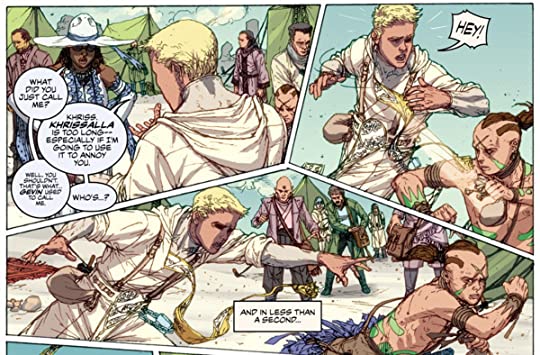 That being said, adapting fairly directly to a graphic novel was perhaps not the strongest way to read Sanderson’s work. We lose a lot of the characterizations and internal thoughts and feelings that we’d otherwise get in prose.

On top of that, the core of what a lot of people love about Sanderson–his magic systems–is lost in this particular visual system. The threads of sand look cool, but they’re just sort of brilliantly swooping around. There’s not really a sense for how it works and what you can do with it that I love seeing in his books.

We do still have hints at the strange worldbuilding of White Sand that I loved though, such as hints of gunpowder being developed on half the world while magic reigns (only) on the other: 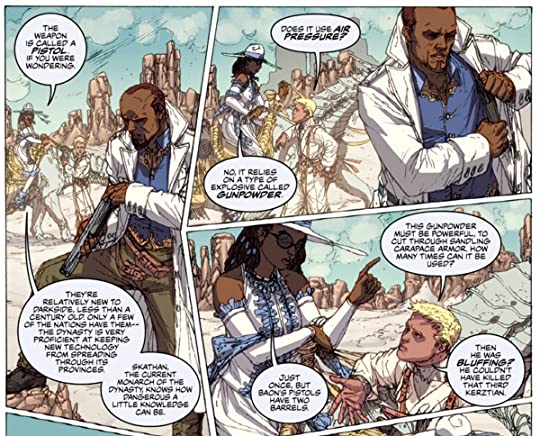 All that being said, I still did enjoy this mostly at the very least for the novelty of it. I enjoy Sanderson enough that I will read pretty much anything with his name on it. :D