Well holy crap. That’s quite the penultimate story… we get a number of showdowns we’ve been looking for this entire time, between Butcher and Homelander and between the Boys and any number of supes. And we get one hell of a twist that I’ll admit I didn’t at all see coming. And like all the best of twists, it explains so much, while at the same time turning everything on it’s heads.

For a climax to this particular story, it’s quite a ride. Well done. 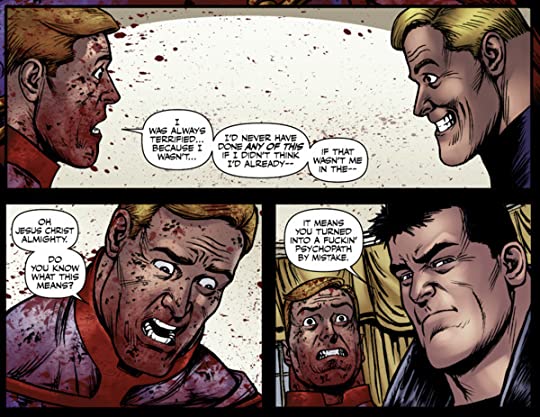 Dang that’s a twist I didn’t see coming. I really want to know if they’ll go this same way in the series. I don’t think so, since Butcher's wife and son are alive and Homelander is directly involved with them . But it’s possible.

Vic the Veep is such a cartoon. I would never have believed such a cartoonish idiot could become president, but … well, you have the last four years. Yes. I went there. It’s really a toss up which would have been / was worse. (/politics)

Well. That’s quite the solution. Flying supes versus an army. It always seems to be the way–sheer numbers win the day.

Heh. That’s pretty much Butcher in a nutshell.