Another side story (there are only a few of these), digging a bit deeper into Bigby’s past, specifically during World War II (which we’d already seen) and some of the unforseen fallout from that. 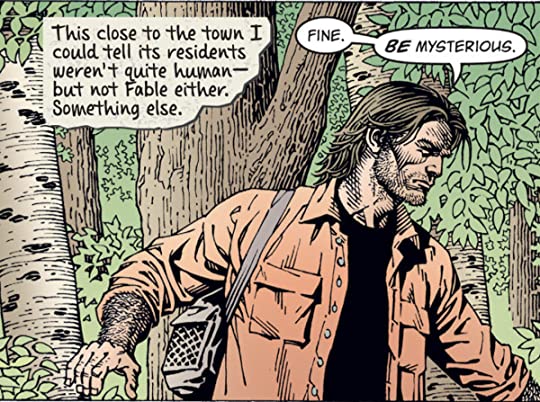 Because of course there’s a town full of secret Naziish Werewolves in the middle of America. Of course.

And of course they worship Bigby ( THE Big Bad Wolf himself) as a god. 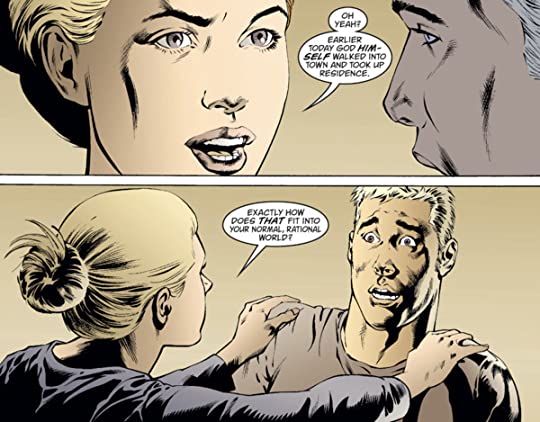 It’s a solid story and a nice interlude, although the timing of the story (while the Mr. Dark plotline is still going on) is a bit strange.

Also, so very much nudity. Naked werewolves are quite a bit more … naked when they’re in a visual medium such as a graphic novel. Sometimes furry, sometimes not. You have been warned.

One random fun comment, I really did love the the ‘how the story came to be’ quote at the end:

I stopped in at the Happy Chef Restaurent, on Board Street, found a nice > table, and ordered an open-faced turkey sandwich, a Coke and a sotry.

“Excuse me?” the waitress said.

I repeated my order.

Our enjoyable back and forth banter went on for a spell, until the Happy > Chef’s manager explain that Story City was so named not because was a near > magical place of wonderful stories for the asking, but after the famous > Supreme Court Justice Joseph Story, 1779-1845. Of course, I should’ve > thought of that.

I love it. And you know what, there’s a whole mine of story seeds right there. Perhaps it isn’t a town full of werewolves, but somehow otherly magical all on it’s own!