Fables: 1001 Nights of Snowfall . One Thousand and One Nights 1, if the storyteller were Snow White, captured on her way to the Arabian Fables to make a pact against the Adversary.

I actually read this slightly out of order, it should have been before and would have given that story a bit more context, but so it goes. It’s mostly a stand alone, so it works.

Overall, the frame story is fairly interesting and we get a bit more about Snow, who’s pretty cool in this world. But only a tiny bit. The stories themselves vary widely. I liked the tail of Ambrose (the Frog Prince) a lot–it’s so sad :sad:–and the story of Bigby–and all he’s done in the past–is fascinating. And apparently Snow White murdered the seven dwarves? Oy.

Otherwise, the main downside–and it was a surprisingly big one–was the art style. The stories each have their own art styles to the point of wondering if they each had their own artist. I have really grown to like the Fables art style and this… this is not that. It’s not a deal breaker, but I’m glad to get back to the main plotline. 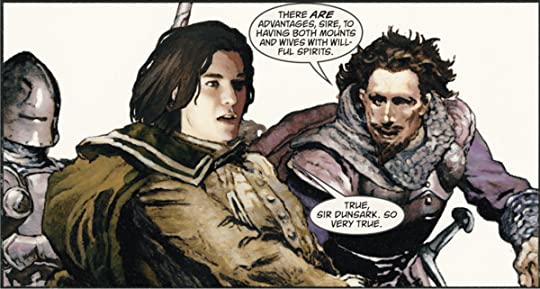 … oy. On one hand, having a willful wife isn’t necessarily a problematic view on it’s own, but to directly compare horses and wives? Oy. 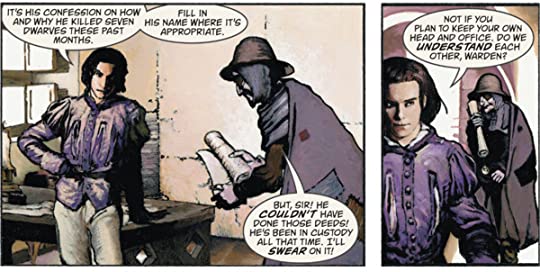 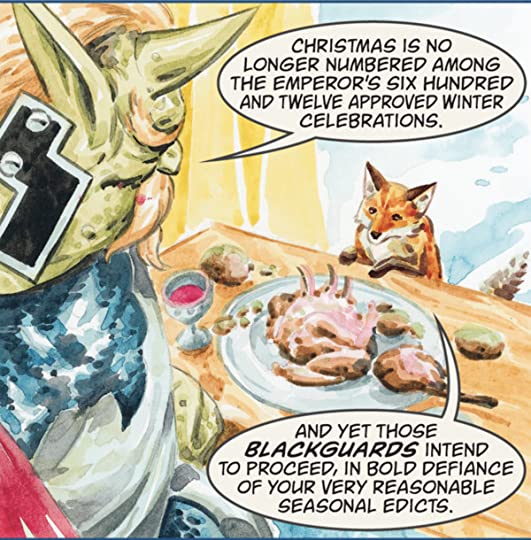 The echoes of the ‘real world’ in the worlds of Fables–and in a converation between a Troll and a Fox no less is fascinaitng. As is the idea that the Emperor has banned all but 612 winter celebrations across all the world, having that manner of control?

Man. I like Ambrose. He’s a fascinating character. Probably neurodivergent–on account of still being as much frog as man, in the way of Fables–it comes across as similar to autism. It’s an interesting story–and so sad. :sad:

Bigby is another of my favorite characters. While we previously had known that Mr. North was his father and that he had a rough childhood (to put it midly), but if we previously knew that Winter (a big name in the Adversary’s court) was his mother, I totally missed that. That… that will be interesting.