It almost feels like a bottle episode in that it’s very limited in scope, but the action and explosions certainly would have cost a fair penny. There’s something underhanded going on, an attack by hundreds of red court vampires, and Dresden coming into his role as a mentor warden. It’s pretty good.

It’s funny because things break down around Wizards. I wonder why they don’t have a better way than running? Nice to see Yoki Yoshimo. We haven’t seen her since Dead Beat and in the main series, nothing other than a comment in White Night as Dresden tries to trace down the history of the Swords1. 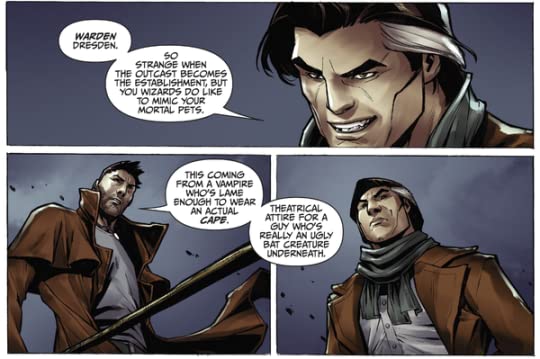 It’s greatly amusing to me how stuck old creatures can get in their ways.

It’s fascinating to see an actual shoggoth in the series for what I think is the first time. We’ve had increasingly many hints about Outsiders and truly alien beings , but is this the first time chronologically that we’ve seen something quite like this? It’s pretty crazy.