I have never before read Fullmetal Alchemist. Amusingly though, I have seen (one of) the TV versions. It’s been a few years though–I watched it with my now wife before we were even married. So going back and reading it, everything has a strange sort of familiarity. 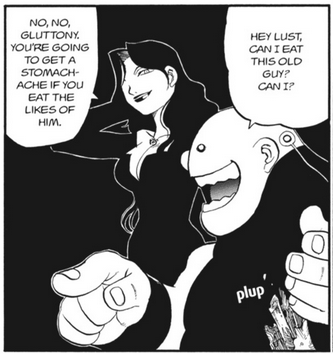 I know just how creepy Lust and Gluttony are and core to the story. Somehow the manga version makes it even crazier.

One thing that manga really hits that I was missing? The comic book sound effects: 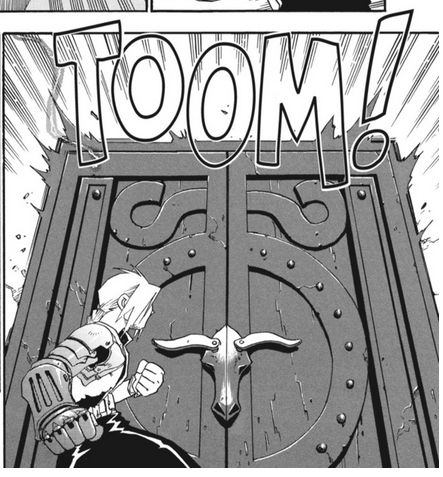 And occasionally, you get things that just feel very stereo-typically Japanese

Overall, it’s a fascinating universe. The idea that magic is strictly science based, where you have to break down one thing to make something else of equivalent materials is just cool.

Humankind cannot gain something without first giving something in return. To obtain, something of equal value must be lost. This is Alchemy’s First Law of Equivalent Exchange. In those days, we really believed that to be the world’s one, and only, truth.

Especially when you end up with an early 20th century feel, driven in large part by this alchemy.

We’ve not yet gotten into what that actually means , but you can feel it underpinning the story and how the world works. Through in a strong dose of religious conflict and anti-military feelings, and you have quite the world.

The characters? They’re all fantastic and weird and bizarre and larger than life. The brothers Edward and Alphonse Elric, in particularly. A living suit of armor and the Fullmetal Alchemist (of course people would confuse the two) with cybernetic limbs as a result of magic gone wrong and a chip on the shoulder a mile wide?

The baddies are bad, some for good reason and some because they’re literal monsters (although I guess we don’t know that yet). Others are conflicted, trying to do the right thing or just live their lives.

Nothing’s perfect, the world’s not perfect. But it’s there for us, trying the best it can; that’s what makes it so damn beautiful.